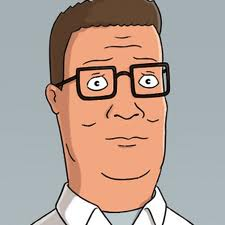 Hank Rutherford Hill is the main character in the TV series King of the Hill. He lives in Arlen, Texas, with his wife Peggy, son Bobby and niece Luanne. He works at Strickland Propane.

Hank was born Hank Rutherford Hill in the ladies room located in Yankee Stadium in New York City, NY to Tilly and Cotton Hill. He originally thought his birthplace was in Texas, but on his quest to get a "Born In Texas" liscence plate, he uncovered his lost birth certificate, stating he was born in New York much to Hank's dismay. Along with Bill Dauterive, Jeff Boomhauer, and Dale Gribble, graduated Tom Landry Middle School and later persued secondary education at Arlen High. After graduating Arlen High, Hank applied to the army with his friend, Bill, but he was denied because officials thought he would be unable to relieve himself in a time of stress. He worked at Jean's West during his late teen years and sold a pair of jordash to his future employer, Buck Strickland, of Strickland Propane. Sometime at Arlen High, Hank began a relationship with Peggy Platter who would later become his wife.

Retrieved from "http://randomicity.shoutwiki.com/w/index.php?title=Hank_Hill&oldid=45"
Category:
This page was last edited on 26 March 2013, at 16:46.
This wiki is hosted by ShoutWiki • Staff Blog
Now hiring • Contact us or report a bug
Privacy policy • About Randomicity • Terms of use • Mobile view